When autocomplete results are available use up and down arrows to review and enter to select.
Back
Published May 31, 2019
In Roads and Bridges

A WALK IN THE PARK 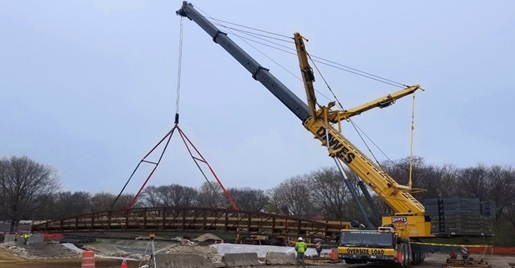 Need to lift 33 tons from 150 feet away? It’s no problem for Dawes Rigging & Crane Rental.

A park project in Milwaukee County, Wisconsin, gave Dawes Rigging & Crane Rental, a member of the ALL Family of Companies, a chance to flex some muscle with its 550-USt Grove GMK7550. The massive machinery was called on to set a new pedestrian bridge that spans the Kinnickinnic River and joins two sides of Pulaski Park.

The 66,000-pound (33 USt) bridge, made of a steel frame and poured concrete, arrived at the site in three sections. It was 152 feet long after assembly. Why so much crane for so little bridge? As is often the case, the weight of the thing to be lifted—in this case, a 33-ton bridge—isn’t the only determinant influencing crane selection. It’s also about where the crane must be set up relative to the pick location. The safest place to set up the GMK7550 was far enough away that a long, lateral reach was required to set the bridge, but that long boom extension would have dramatically lowered the crane’s useable load chart.

“Our pick radius was 105 feet,” said Tyler Weiher, rental specialist with Dawes. “To achieve the appropriate capacity at that span, we chose the GMK7550, a crane with a lot of muscle, and then we outfitted it with what’s called a MegaWingLift™—an attachment that increases capacity.”

Once attached, the MegaWingLift fans out in a Y-shape off the back mast. In this case, it boosted the structural strength of the boom, allowing an increase in capacity from 41 tons to 71 tons based on 197 feet of boom and the angle of the reach. With the boom for the Pulaski job configured at a shorter 147 feet, the 33-ton bridge was well within weight.

“The Kinnickinnic River has large embankments on either side that precluded us from getting a crane any closer to the bridge’s set point,” said Weiher. “We needed the reach the 7550 could offer.”

Dawes was brought onto the job by C.W. Purpero Inc., which received the contract from the Milwaukee Metropolitan Sewerage District. Dawes arrived at the scene the day before the pick, where they assembled the crane and convened with other tradespersons to review lift details for the following day.

The crane operator, also provided by Dawes, had to set the bridge on two concrete pads with a scant half-inch of tolerance. A full ground crew from C.W. Purpero was on hand to assist. Placement involved lifting the bridge and holding it as the crane maneuvered back and forth to achieve the correct position. The exacting process took several hours. Only the 7550, with its reach and power, could perform such a job at that radius.

“Due to the weight of the bridge and the distance between the crane and load, the only way we could complete the lift was with the GMK7550 outfitted with MegaWingLift,” said Weiher. “The 7550 has the best chart in its class, and we were able to highlight its capabilities with this lift.” Dawes is the only crane supplier in the area with such a high-capacity crane.

The new bridge is part of an $8.6 million park improvement project in which the entire concrete bed of the Kinnickinnic River in Pulaski Park was removed and the river banks widened to up to 200 feet. It was this widening that necessitated the new pedestrian bridge.

The ALL Family of Companies is the largest privately held crane rental and sales operation in North America. Their strategically located branches have access to one of the world’s largest and most modern fleets, operating under the ALL, ALT, Central, Dawes, and Jeffers names. Toll free: 800-232-4100 or www.allcrane.com.