When autocomplete results are available use up and down arrows to review and enter to select.
Back
Published Oct 20, 2021
In Unique Picks

NIGHT PICK AT THE SPLIT 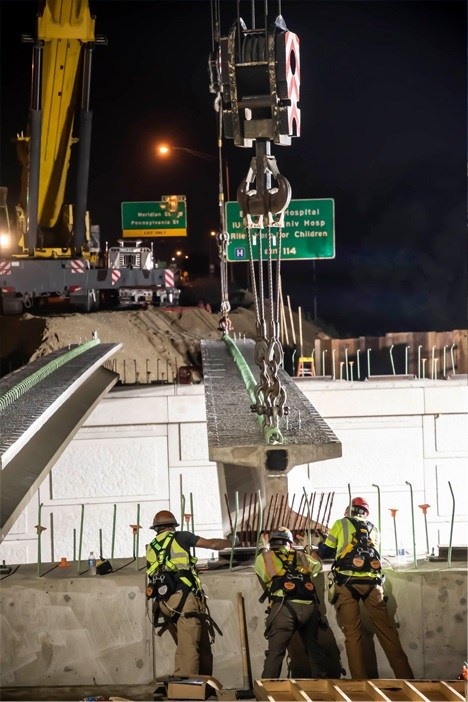 The I-65/I-70 North Split Interchange project in Indianapolis rolls on, with an aggressive timeline that calls for the construction of 50 bridges in 18 months. A prominent downtown bridge got the rebuild treatment when the span carrying northbound and southbound lanes of I-65 over Central Avenue was completely replaced.

Central Rent-A-Crane, a member of the ALL Family of Companies, provided cranes for general contractor Superior Construction. The job called for setting precast prestressed beams which were manufactured by Prestress Services Industries.

To minimize traffic disruptions, the lifts were scheduled for overnight, creating one of the more challenging scenarios encountered in the crane business: a two-crane night pick.

Each direction of the bridge, southbound and northbound, required six beams for a total of 12. Beams weighed in at 42 tons, measuring 80 feet long. To accommodate the load, Central Rent-A-Crane specified Grove GMK6300L and Grove GMK7550 all-terrain cranes for the dual picks.

The GMK6300L has a 350-ton capacity and was configured with 120 feet of main boom at a 45-foot radius with 208,000 pounds of counterweight. It was chosen because its capacity fell well within the weight and reach requirements. As there was not another 350-ton class AT available, the second crane was a 550-USt GMK7550, configured with 116 feet of main boom also at the 45-foot radius. It required 176,000 pounds of counterweight.

Setting beams for each direction of the bridge took only one night each. “We had a lane closure from 7 p.m. to 5 a.m. for each night,” said Ronnie Baker, sales representative from Central Rent-A-Crane. “That gave us a 10-hour window to pick and set six precast bridge beams.”

Baker says trucks from the manufacturer began lining up along the highway just prior to the 7 p.m. lane closure so the truck carrying the first beam could drive into position immediately. From there it was a continuous process, with each beam taking 30 to 60 minutes to pick and set.

“The orientation of the job site allowed the cranes to be far enough away to pick in tandem, cable up, and swing at the same time.” said Baker. Spotters strategically positioned with a complete view of the work zone were in constant radio communication with the crane operators.

“This went remarkably smoothly,” said Baker. “It’s a credit to the organization of the contractor and the supplier, and the execution of our operators.” Ironworkers returned to the site later to put in deck pans and rebar and pour concrete.

Rigging for the beams was handled by Superior Construction’s crew, with team members able to rig beams in just a few minutes each. Cranes were set up behind concrete barriers, well away from the single lane of traffic that was maintained overnight.

The North Split project will continue through next year and into 2023. Baker says Central has begun discussion with the project’s contractor about the next bridge to be constructed.