When autocomplete results are available use up and down arrows to review and enter to select.
Back
Published Oct 14, 2019
In Commercial Construction 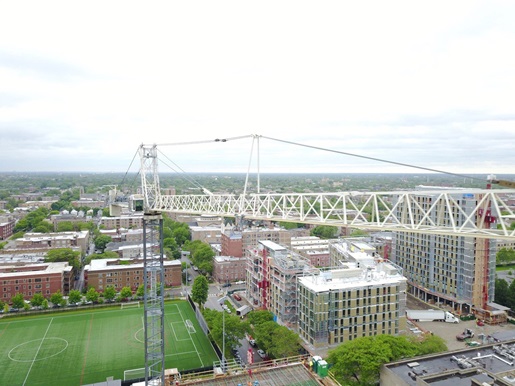 The University of Chicago is constructing a new campus building whose architecture will be as unusual as its purpose. The David M. Rubenstein Forum, a 10-story, 97,000-square-foot building, will be solely dedicated to gathering places for intellectual, institutional, and educational exchange. Its design, by New York-based architectural firm Diller Scofidio + Renfro (DS+R), resembles six boxes stacked on top of one another, slightly askew. 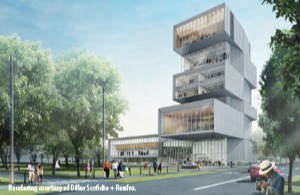 With its emphasis on scholarly collaboration and special events, the building will provide the university with much-needed meeting spaces for workshops, lectures, and other activities.

With a maximum jib length of 262 feet, a 22-ton capacity, and a 188-foot hook height, the crane proved ideal for handling the steel, concrete, and other materials needed to erect the structure.

The structure is an important piece of the evolution of the campus. It will provide the university with a 185-seat auditorium and multipurpose meeting spaces. The building is composed of a two-story base and a slender eight-story tower. The unique “stack” theme of the structure carries over to the interior, where the tower will be organized into a stack of neighborhoods. Each will have meeting and communal spaces offering diverse environments—formal and informal, soothing and dynamic, scheduled and spontaneous. Each neighborhood has a central lounge to promote a sense of community.

The neighborhoods are vertically stacked, rotated, and oriented to their own unique perspective of Chicago, creating a panoramic 360-degree form rather than a front or back face.

“We set up the tower in October of 2018 and just disassembled it a few weeks ago,” said Urbanski, noting the crane had been part of the campus skyline for nearly a year.

Central Contractors Service is a premier provider of tower cranes and other construction cranes throughout Illinois and the Greater Chicago area. Just a few years ago, the city was in the midst of having the greatest number of simultaneous tower crane construction projects in its history, and nearly three-quarters of them belonged to Central. Therefore, it made sense that when the University of Chicago undertook such a paradigm-shifting project, Central would be involved.

The Rubenstein Forum is named for university trustee and alumnus David M. Rubenstein, co-founder and co-CEO of the Carlyle Group, in recognition of his ongoing generosity to the university. The building will be situated next to the Harris School of Public Policy’s future Keller Center and across the Midway from Rockefeller Chapel.

The ALL Family of Companies is the largest privately held crane rental and sales operation in North America. Our strategically located branches have access to one of the world’s largest and most modern fleets, operating under the ALL, ALT, Central, Dawes, and Jeffers names. For a rental quote: 800-232-4100 or www.allcrane.com.