When autocomplete results are available use up and down arrows to review and enter to select.
Back
Published Sep 25, 2016
In Roads and Bridges

BUILDING THE BIG BRIDGE FOR THE BARABOO BYPASS 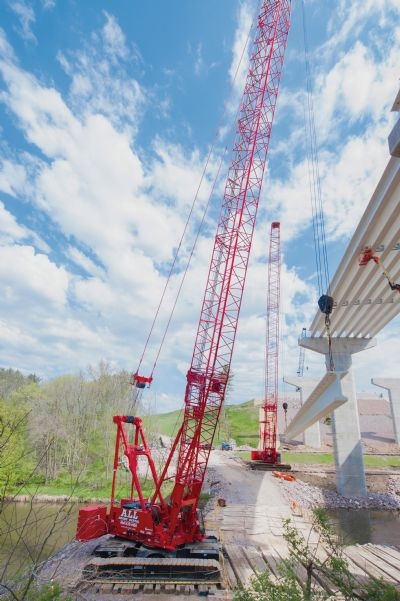 If you’ve never heard of Baraboo, Wisconsin, you might want to check it out. This area in Sauk County — crossed east to west by U.S. 12 — is a prime tourism center with spectacular natural areas, including Devil’s Lake and Mirror Lake State Parks. It also boasts popular attractions in Lake Delton, Baraboo, and Wisconsin Dells — and the Baraboo River is a paddler’s delight for kayaks and canoes.

An hour northwest of Madison, U.S. 12 in Baraboo connects Dane and Sauk counties to the interstate system. In 2011, work began on the new four-lane Baraboo Bypass off U.S. 12. The bypass is being constructed in two phases: the 5.7-mile north section of the bypass was completed in 2011, and the 5.4-mile south section is under construction, to be completed in 2017. The south section includes multiple bridges, with the biggest bridge stretching over the scenic Baraboo River. Once complete, the bridge will be the largest and tallest in Wisconsin, with a 160-foot drop.

In early 2016, Lunda Construction Co., the bridge construction subcontractor for the south section, chose Dawes Rigging & Crane Rental in Madison, a member of the ALL Family, to provide some lifting power — a matched pair of 300-USt Manitowoc 2250 crawler cranes, each configured with 190 feet of boom. Dawes was able to accommodate Lunda’s equipment requirements from ALL’s impressive fleet, which includes the largest privately-owned crawler fleet in North America.

Together, Dawes and Lunda developed a lift plan. Lunda would build temporary work platforms on each bank of the river from which the cranes, in tandem, would lift the steel beams for the bridge deck. The trucks carrying the components for the two 2250s began to arrive April 11. By May, the bridge’s foundation of concrete pylons was ready to receive the 80 locally made, 160,000-pound steel beams.

Two months were allotted to set the beams. But the area on the Baraboo River where the bridge was being built could be extremely windy. And further, it had been a particularly rainy spring in Wisconsin. The team kept a close eye on the potential for bad weather or rising riverbanks, either of which could endanger the work platforms Lunda had built, causing project delays.

Mindful of the customer’s concerns about weather and project time, and with the advantage of having its own trucking fleet, Dawes was able to deliver the cranes ahead of schedule. One crawler was assembled on the river’s south bank on the work platform; the other on the north bank. The majestic red crawlers worked together, carefully picking the beams off a truck and setting them on the bridge at an average rate of eight beams per workday. Partway through the project, Dawes had to disassemble and move the south bank crawler to join its partner on the north bank in order to set all the beams where they were needed. But that didn’t slow down the team. They finished ahead of schedule, setting all 80 beams in just over one month.
Because ALL offers regional distribution of its entire fleet via a dedicated supply chain, Dawes was able to deliver exactly what the customer needed ahead of schedule — even a matching pair of crawlers to Baraboo.
Watch an aerial video of this jobsite.
###
This article was originally published in ALL's Lift Line magazine, Fall 2016 issue.