When autocomplete results are available use up and down arrows to review and enter to select.
Back
Published Nov 20, 2015
In Unique Picks 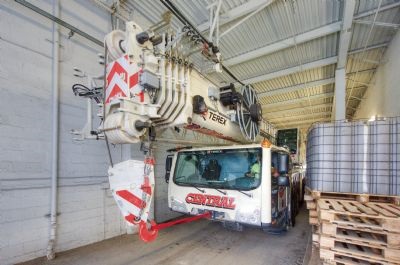 The ALL Family of Companies loves a challenge. In July, its Illinois branch, Central Contractors Service, Inc., was handed a monster of a challenge when they answered the call for help from Chicago’s Revolution Brewing. The brewery is undergoing a major expansion project and needed to have several new fermentation tanks lifted and set into place in the rear of the building. Piece of cake for a crane company, right?
But the logistics of the job site presented an exceptional test. Central needed to select a crane with capacity enough to lift the 24,000-pound tanks, but also compact enough to physically access the job site. While there was ample room behind the brewery for the lifts to be performed, the only way to get the crane into the area was by driving it through a narrow tunnel — slowly and carefully.
A 120-ton Terex AC 100/4(L) all-terrain crane was selected for the job, having both the ability to travel on the road to the job site and the strength needed to handle the loads. ALL’s 3D Lift Plan, a software technology that gives lift planners the ability to calculate and view every detail, was used to map out the picks, with the journey through the tunnel carefully measured and meticulously planned. Measurements indicated this AT would fit through the tunnel — but just barely, with literally only inches to spare all around. As the job date approached, the customers were understandably nervous, but measurements are measurements, and everything indicated this could be done, particularly with Central’s skilled operator at the helm of the Terex.
First, the fermentation tanks, manufactured and shipped from Germany, were delivered by truck to the neighborhood where the brewery is located. But with concerns about obstructions and public road access, it was determined that the safest location to store the tanks, and from which to stage and conduct the lifts, would be the lot next door to the brewery.
On lift day, traffic was temporarily halted while the operator made the three-point turn to get into the tunnel, proceeded carefully and slowly through, and then made another tight turn out of the tunnel to get into place for the lifts. To everyone’s relief and true to the plan, the Terex did indeed fit.
“Once we were in, we had about two inches to spare on the top side, but we were good,” said TJ Wicklander, sales representative for Central. “The customers loved it.”
After the crane had finished its tight journey through the tunnel and into place, the machine’s boom was extended to 125 feet, and the four tanks were successfully picked and set into place. “It was a little hairy to get through, but we knew we had selected the correct equipment,” Wicklander said. “Anything smaller and you wouldn’t be able to lift the tanks, and anything bigger wouldn’t fit or be able to make the turns.”
As the experienced team at the ALL Family of Companies knows, sometimes the best way to meet a challenge is to go right through it. With careful planning and a determination to get the job done right, no matter what obstacles they faced, the team from Central Contractors Service did just that. This dedication and expertise is what customers have come to count on when they call on ALL.