When autocomplete results are available use up and down arrows to review and enter to select.
Back
Published Oct 20, 2021
In Unique Picks

DEAD IN THE WATER 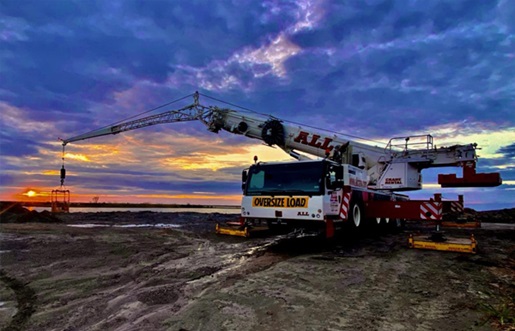 After a hurricane devastates a region, what’s the most important thing that needs to happen next? Is it providing emergency medical care? Delivering food and water? Clearing roads and highways of debris? Temporary shelter?

Actually, the most important thing is to be able to communicate where all those resources need to go. And that can’t happen when cell towers have been damaged by the storm. So, one of the first things that needs to be done is repairing those cell towers.

ALL Crane Rental of Louisiana, a member of the ALL Family of Companies, has earned a reputation as the cell tower leader in the region, handling tower/antenna erection and scheduled maintenance all through the year. And when a hurricane hits, as happened when Ida made landfall on August 29, 2021, the branch gets the call to help perform vital emergency repairs.

The day after landfall, when many branch employees had damage to their own homes to contend with, a small group of just 11 people rallied to resurrect the more than two dozen cell towers that were no longer operational in the wake of Ida.

To say there were a lot of moving parts to the undertaking is an understatement. “It was like putting together one of those puzzles where every piece is the same color,” said Kasey Stephens, general manager of ALL Crane Rental of Louisiana. “Yeah, and the pieces are getting thrown at you as fast as in Tetris,” added Micah Murchie, a sales representative with the branch. Both credit teamwork with getting it done, giving special credit to dispatcher Jessie Hacker. “During these weeks, the people of our branch have talked more to each other than to their respective spouses,” said Murchie. “It’s been non-stop, with everyone doing their part,” said Stephens.

Before any crane work can begin on a cell tower, ground mats have to be trucked to the work site, with a forklift used to remove and set the mats. “Ground in Louisiana is already swampy,” said Murchie. “Factor in a hurricane, and no work is getting done without ground mats.” Each mat weighs 2,500 pounds, with anywhere from 14 to 28 mats needed per site. Setting the mats takes about a half-day. Then the crane can be trucked in and assembled, taking another half-day. The following day, work begins at that site.

But in the meantime, other trucks are delivering ground mats, forklifts, and cranes to other sites. And people are needed to drive and/or operate that equipment. Drawn from a pool of just 11 people. Criss-crossing the region to get everything done.

One begins to understand the puzzle/Tetris comparison.

The branch was also running a half-dozen trucks to deliver mats, forklifts, cranes, and counterweights to the various work sites. Back at the yard, more than 40 trailers were in the rotation, loaded with the necessary items so a truck could come back, link up, and be on the way to the next job.

What kinds of work were the cranes doing? Mostly assisting repair contractors in replacing downed or damaged antennas. The basic procedure required first attaching a man basket to the boom and lifting a technician to the top of the tower. The boom is lowered, the man basket removed, then the crane is rigged to the top of the tower’s antenna. The crane supports the 1,300-pound weight of the antenna while the technician works to unbolt it and free whatever remains. Once freed, the crane lowers the damaged antenna to the ground, is rigged to the replacement antenna, and the process continues in reverse—the crane supporting the antenna’s weight as the technician installs it. Towers typically have multiple antennas, so the crane continues feeding antennas until the job is done.

Finally, after the last antenna is replaced, the crane picks up the man basket again and retrieves the technician from the top of the tower.

Of course, as the branch was keeping up with the repair work, its own team members were also contending with the cell phone service interruptions they were helping to correct. Some people had two different cell phones with different carriers, so they could switch back and forth to the one that was getting service. For a time, power was out at the branch, so laptops were taken to the parking lot and plugged into vehicle dashboard outlets.

“It’s a group that’s small but mighty,” said Stephens. “It’s why the cell phone companies rely on us. They know that we understand the ins and outs of their towers and will do what’s necessary to get them up and running quickly and safely. Because after a hurricane, cell service becomes a literal lifeline.”