When autocomplete results are available use up and down arrows to review and enter to select.
Back
Published Mar 24, 2017
In Roads and Bridges 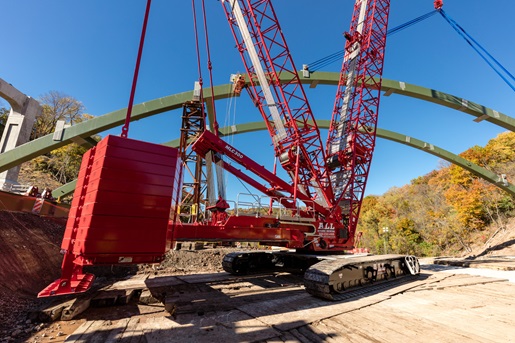 Built circa 1921, Pittsburgh’s Beechwood Boulevard Bridge, known locally as the Greenfield Bridge, underwent rehabilitation in the 1980s. By 2013, plans to replace the aging structure were underway. The old bridge was demolished, and the erection of the new bridge began in early 2016. Reaching across I-376 (known as Parkway East), the new bridge will be a steel open-spandrel arch, designed to incorporate some of the original’s sculpted decorations and pillars while offering a more modern structure for cars, pedestrians, and cyclists. It will include three lanes for car travel, a bike lane and a sidewalk.

Subcontractor Amelie Construction hired ALL Crane Rental of Pennsylvania, a member of the ALL Family of Companies, to assist with erecting the new bridge. Amelie, having previously worked with ALL, knew the company had a crane perfectly suited for the job—the 330-USt Manitowoc MLC300 crawler crane. The MLC300 has a unique variable position counterweight system (VPC), which automatically moves the centered counterweight from front to back as needed, depending on the boom’s angle, radius and load weight. The movable counterweight system increases the crane’s stability and reduces its operating footprint, resulting in reduced ground-bearing pressure with less matting and ground prep needed. ALL used 3-D Lift Plan, an online lift-planning software, to map out the work.

The crane and its crew were on site for approximately one month, late fall 2016, to erect the new bridge’s deck. The Pennsylvania Department of Transportation (PennDOT) scheduled a weekend shutdown of the Parkway so the crawler, equipped with 275 ft of boom, could lift and set a 276,000-lb segment of steel decking over the highway to be the base for the bridge’s superstructure. The bridge’s steel arches were also set during the weekend closure. Time was of the essence to stick to PennDOT’s firm schedule; the Parkway closed at 3 a.m. on a Saturday for work to begin. Padding was built on the ground—and on the highway itself—to prepare for the MLC300, which would lift and set the massive structure. The deck and arches were set on time and without incident. By early Monday morning, the Parkway was reopened to traffic.

The crane remained on site for several more weeks to complete the structural erection of the bridge, which is expected to open in fall 2017. ALL was proud to provide the lifting power for this project—the replacement of a significant landmark in Pittsburgh.

No stranger to historic bridgework, the ALL Family of Companies brings decades of infrastructure-related experience, skilled and capable teams, and well-maintained, modern lift equipment to a variety of projects.