When autocomplete results are available use up and down arrows to review and enter to select.
Back
Published Sep 9, 2020
In Roads and Bridges 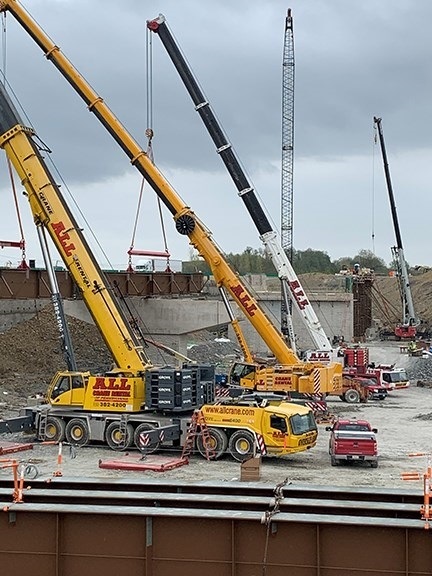 Alvarez, Inc., which specializes in bridge construction, is using a trio of powerhouse cranes from ALL Crane Rental of Pennsylvania, a member of the ALL Family of Companies, to set bridge components. The three machines have a combined capacity of 1,300 tons: a Liebherr LTM 1250-6.1 (300 USt), a Grove GMK6400 (450 USt), and a Grove GMK7550 (550 USt).

Alvarez needed all that power because of the large size of the bridge spans, which required the three cranes to set the three sets of steel girders it took to achieve the appropriate length. Mike Lang, project manager for Alvarez, Inc., said the cranes worked in tandem to pick and set multiple girders at a time. “To construct the bridges, each of the three cranes would pick up two side-by-side girders, for a total of six girders being placed at a time,” Lang said.

This method gave the bridge the strength it needed while also allowing steel to be set quickly. “This bridge has a little bit of curviture on it,” said Lang. “The more radius of curvature a bridge has, the more steel you need to achieve stability.”

Girders were then spliced in the air by a team of up to a dozen ironworkers, effectively creating a single bridge piece from the three girders. Ironworkers got to the steel in a variety of ways. If it was possible to anchor one side of a girder to an abutment, they would tie off onto the steel itself. When that wasn’t possible, a man basket was employed.

The job required more than high-powered cranes, though. It needed human expertise in the cab. “Alvarez has used cranes from ALL exclusively for 20 years,” said Lang. “In that time, you also develop a comfort level with their crane operators. This was a complicated undertaking that required the operators to work in meticulous synchronization. Because we have that trust in their abilities, it made the entire job go that much smoother.”

The first crane would pick its sections, swing them into position and hold. Next, the second crane did the same with its sections. At that point, the first set of ironworkers entered to begin the splicing process. Crane operators would adjust height as needed to line up the sections. After the first two sets of girders were spliced, the third crane would swing in its sections for splicing, completing a span.

The cranes had to perform a total of 35 of these triple lifts over the course of two weeks just to construct the first two phases of the I-79 bridge. The cranes moved through 1,100 tons of steel in that time. For phase three, the 450-USt Grove GMK6400 was able to bow out and the remaining two cranes handled the work.