When autocomplete results are available use up and down arrows to review and enter to select.
Back
Published Apr 11, 2019
In Unique Picks

REELING IN THE BIG ONE 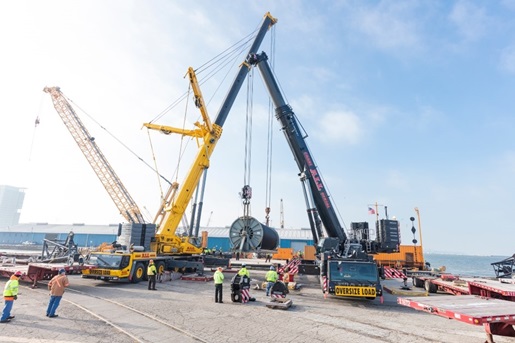 All along the Great Lakes, fishermen dream of reeling in the big one. ALL Erection & Crane Rental Corp. of Cleveland, a member of the ALL Family of Companies, may have reeled in the biggest one of all—a 230,000 pound reel full of electrical cable, and one that helped bring reliable electricity to residents of a Lake Erie island.

Island living isn’t just reserved for the Caribbean. Even on the Great Lakes, you’ll find people living on islands, whether for the privacy, the soothing waterfront views, or simply enjoying a laid-back lifestyle. Kelleys Island, located in the western basin of Lake Erie, is home to 150 residents, a number that swells to 1500 in the summer months. Electricity to power the island is provided by two electrical circuits that lay on the lake bottom.

When one of those lower-voltage electric circuits reached 65 years of service life, the contract to replace it went to Kokosing Industrial Durocher Marine Division, a Michigan-based premier installer of subaqueous cable systems throughout the United States, Canada, and Caribbean.

Running a 35kV electrical cable from the mainland switch gear in Lakeside-Marblehead, Ohio, to Kelleys Island four miles to the north requires 22,500 feet of cable, which comes wound around a reel. This is no fishing reel, though. This reel weighs 230,000 pounds and stands 11.5 feet high, 11 feet wide and 47 feet long. It arrived by rail car to the Port of Cleveland, where it needed to be transferred to a work barge that would then travel to the job site.

The transfer was scheduled to happen at the port using the onsite Buckeye Booster crane for the lift. However, unforeseen mechanical issues scuttled its use. Kokosing Industrial called on ALL Erection & Crane Rental to step in and save the day.

ALL quickly mobilized two heavy lift cranes to perform a tandem lift of the gigantic reel, a 500-USt Liebherr LTM 1450-8.1 and a 550-USt Grove GMK7550. It’s a testament to ALL’s robust fleet that they were able to spec two large machines so quickly and deliver them from a local yard.

Getting the large reel off the rail car and onto the barge required two main steps. “Because of the radius we were working at, we had to use the LTM 1450 to pick the reel off the rail car and position it on the  dock,” said Tim Paquette, project manager for Kokosing Industrial Durocher Marine Division. “Then we moved a crane along each side of the reel and made the final pick, using the LTM 1450 for the shorter radius and the GMK7550 for the longer one.” In all, the  transfer from rail car to barge took several hours spread across two days.

After secure placement on the barge, the reel made the trip west where the cable was installed. It is expected to provide more than  50 years of service, powering the homes, restaurants, and businesses of Kelleys Island. And that’s no fish story.