When autocomplete results are available use up and down arrows to review and enter to select.
Back
Published Jun 7, 2017
In Roads and Bridges 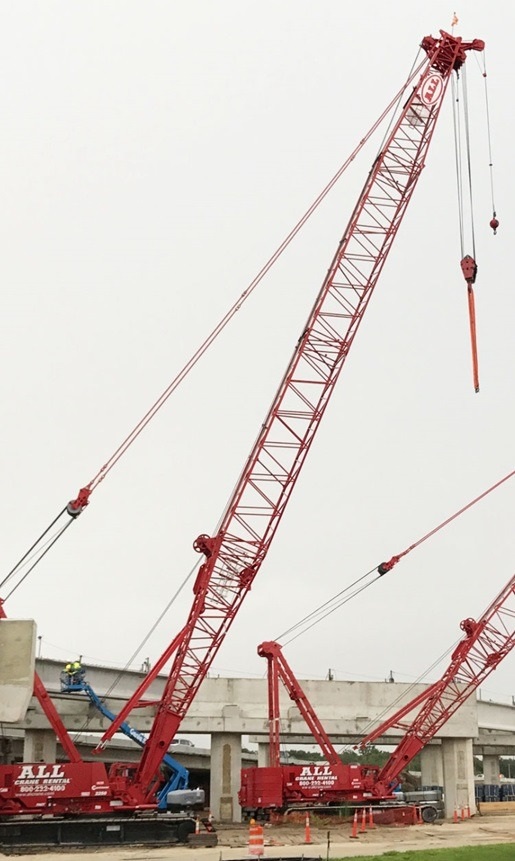 Widening a highway includes widening and replacing bridges, and for that, cranes are in high demand. Florida’s I-4 corridor, an east-west expressway that connects Daytona with Tampa, is undergoing an ambitious five-year, $2.3 billion widening project that will expand the expressway from four lanes to six. The ALL Family of Companies is at the center of the action.

ALL is working on a portion of the widening project that includes expanding and/or replacing 16 bridges during a two-month period—a staggering average of 3.75 days per bridge.

ALL’s branches in Orlando and Tampa are supplying both personnel and equipment, including two 300-USt Manitowoc 2250 crawler cranes, each with 150 ft of main boom. Completing the lifts on schedule at each bridge is crucial, and then moving on to the next one is a significant undertaking. It takes 28 truckloads to move the enormous Manitowoc 2250s to the next location. This is where the ALL team’s skill and experience really shine.

Cranes usually spend just under four days at any given bridge site. When they are ready to move, the cranes are disassembled and trucked by ALL’s own trailer fleet—one of the largest fleets in the U.S. in sheer number of units—and reassembled at the next bridge site. With its aggressive timeline, the project not only needs the right equipment, it needs the right people. Luckily, ALL has both.

The 10-man assembly/disassembly crew assigned to the job is an all-star ensemble from ALL’s Orlando and Tampa locations. Think of them as a super-sized race-car pit crew, a well-oiled machine unto themselves. They will stay together for the entire project because the customer’s schedule demands precision from the crew. “They are able to tear the equipment down in one day, then truck it and rebuild it by the next day so work can begin anew,” said Norman Huddy of ALL Crane Rental of Florida (Tampa). “With a standard size crew, the process would normally take three or four days.”

The team is often already reassembling before the balance of the crane has arrived, achieving simultaneous assembly and disassembly and trucking services. “This takes the highest-level knowledge and focus from everyone involved, with the goal to complete all the bridges in such a short time frame,” said Huddy.

ALL was brought into the job by SGL, a joint venture formed for this project (Skanska Infrastructure Limited, Granite Construction Incorporated and Lane Construction Corporation).

“Our weekly production meetings are basically scheduling meetings for this project,” said Huddy of the combined SGL/ALL effort. “The logistics involved are significant, but we embrace it. The challenge motivates everyone involved, and that means more uptime and productivity for our customers.”