When autocomplete results are available use up and down arrows to review and enter to select.
Back
Published Sep 26, 2016
In Unique Picks 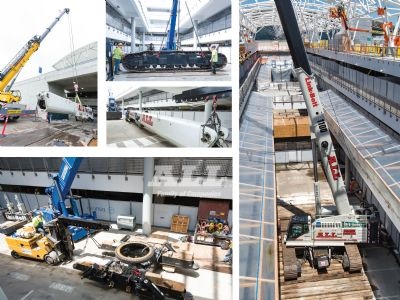 When the Indianapolis International Airport’s new terminal and massive attached parking garage were built in 2008, it was artistically designed to blend aesthetics and functionality. The garage featured a soaring fabric canopy built over a center atrium to protect the atrium’s pedestrian walkway, enhancing the visitor experience.
This year, airport officials began upgrades to the structural steel supporting the canopy, as well as the addition of a fifth deck enclosure which would protect the atrium from the elements. The new structural steel would shorten the spans of material between supports. The project would involve adding 40 steel trusses, each weighing approximately 12,000 pounds, plus supporting beams and columns for the trusses. The parking garage is not only for airport travelers’ use, but also serves as the storage lot for the airport’s rental cars. This meant an additional challenge — access to the garage had to be maintained continuously throughout the entire construction project.

Installing new steel trusses sounds straightforward for a contractor, right? Not quite.

Getting a Crane Through the Doorway
The steel erector for the airport garage project, Wilhelm Construction, needed a crane company to lift and set the steel trusses. Enter the ALL Family, a longtime collaborator that had opened a new Central Rent-A-Crane branch in Indianapolis earlier this year.

As the two experienced company representatives began discussions on how to best approach the job, they determined that FAA height restrictions made it impossible for a crane with the proper capacity, boom length, and height to lift steel up and over the garage exterior. A machine big enough to do the job from the outside of the garage would have violated the airspace.

It seemed that the ideal way to handle the work would be from inside the garage’s atrium, which could provide a large, open work space from which the trusses could be carefully picked and set precisely where they were needed.

But there was just one problem: The only way into the garage from the outside was through 8-foot-high entrance bays sized for regular road vehicles like cars, trucks, and vans. There was no way ALL could drive any crane through an opening of that size. At least not one with the lifting power they needed.

As a company, ALL enjoys responding to challenges like these. It’s when their ingenuity, experience, problem-solving acumen, and the right equipment can benefit their customers most.


Building a Ship in a Bottle
There’s an old joke that asks, “How do you eat an elephant?” The answer: “One bite at a time.” That became the team’s approach, one piece at a time.

First, Wilhelm selected one of ALL’s 110-USt Link-Belt TCC-1100 telescopic crawler cranes for the job. The TCC-1100, according to Link-Belt, “offers an impressive capacity chart at a radius that rivals even lattice crawler cranes with a similar base rating.” Combining capacity, mobility, and reliability with a five-section telescopic main boom, the adept TCC-1100 would not only go where other cranes can’t go, but, most importantly, would offer a telescopic boom that could be extended from 40 feet to 150 feet — whatever was needed to maneuver inside the atrium. This would give the operator remarkable control while maintaining impressive performance capacity.

But how do you get a 110-ton crane through an 8-foot entrance? The team decided to completely disassemble the crane outside the garage, taking it down to the bare chassis. Then, ALL towed the pieces through the 8-foot opening, rebuilding the machine piece by piece inside the atrium — just like building a ship in a bottle.

Once assembled inside, the TCC-1100 was the perfect machine for the job. The operator could boom over to pick up the trusses from close by and then carefully lift them up and into the canopy area where they would be set in place.
“I knew the TCC-1100 was the right machine for the job, and we approached ALL because we knew they had the equipment and experience for these lifts,” said Rob Parker, ironworker general superintendent at Wilhelm. “We just had to figure out how to get it inside such a small opening.”
“We bring equipment and experience to every job,” said Kevin Hileman, Indianapolis branch manager for Central, “but working together as a team with our customers makes all the difference.”
The team only needed two days in late May to disassemble the crane, haul the pieces inside, and reassemble it, readying it to work on setting trusses for about two months. Once the job was complete, the crane was disassembled, the pieces towed out, and the crane reassembled for its return trip to the Indianapolis yard.
Rick Mikut, manager of the companywide crawler division, said he knew they had a winner when they acquired the first three Link-Belt TCC-1100 telescopic crawlers off the line. “They were chosen specifically to make our customers more efficient and productive. It turned out to be the perfect answer for this customer.”
# # #
This article was originally published in ALL's Lift Line magazine, Fall 2016 issue.