When autocomplete results are available use up and down arrows to review and enter to select.
Back
Published Apr 15, 2020
In Roads and Bridges 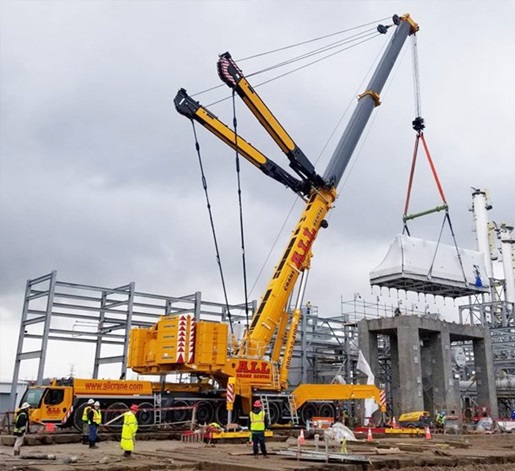 An ambitious project is underway in southwest West Virginia, one that will reconstruct a decommissioned methanol plant that originated in Brazil. ALL Crane & Equipment Rental Corp. of Nitro, West Virginia, a member of the ALL Family of Companies, provided a special crane for several crucial lifts for the project.

The project allowed the Nitro branch of the continental crane rental giant to showcase the power and versatility of ALL’s recently acquired Liebherr LTM 1750-9.1, the second in its fleet. The LTM 1750 is a 900-USt, 9-axle, 18-wheel all-terrain crane that now features increased load capacity, software upgrades, and a new luffing jib configuration using lattice sections to provide additional capacity increases. ALL purchased this second LTM 1750 to dedicate it to work in southern states across its service region.

This project was the first for the crane since joining the fleet.

The crane was freshly delivered when it was time to lift a 184,000-pound compressor for the methanol plant. For its inaugural run, it was configured with 125 feet of main boom, a Y-guying attachment set at 15 percent for added strength, and full counterweights of 450,000 pounds.

The compressor, which was 38 feet long, 16 feet wide, and 14 feet tall, had to be lifted and set onto a 40-foot concrete base. The job’s level of difficulty was increased by the 16 anchor bolts already extending two feet below the compressor. Each bolt had to be threaded through a corresponding hole predrilled atop the base, making final positioning akin to threading 16 needles simultaneously. And if that wasn’t challenging enough, in this case, the thread weighed nearly 200,000 pounds and was suspended four stories in the air.

Because of the precision required, the compressor had to remain perfectly level. “Two ironworkers assisted our operator in guiding the compressor bolts into position,” said Ronnie Luikart, sales representative for ALL Crane & Equipment Rental Corp. “One radioed information directly to the operator, and the operator maintained visual contact with the ironworkers at all times.”

Total time for the lift was approximately four hours, with the piece in the air for roughly 45 minutes.

Prior to lifting the compressor, the LTM 1750, in the same configuration, had lifted a smaller piece—a 70,000-pound steam drum that slid into the same 40-foot base constructed to hold the compressor. Because it was the lighter piece, even though it was to be lifted first, the ALL team made the decision to configure the crane for the heavier load to save time for ALL’s customer, the general contractor on the methanol plant reconstruction.

After these lifts were completed, the LTM 1750 remained on site but went through a transformation. Counterweights were removed so the crane could be moved 800 feet; 43 feet of jib were added to the boom; 200,000 pounds of counterweights—less than half needed for the previous lift—were used; and the Y-guying was extended to 35 percent.

The new workpiece was a missile-shaped flare stack at 89,000 pounds, 170 feet high, and just seven feet across at its widest point. It had been assembled horizontally on the ground, so the customer used its own smaller assist crane to steady the bottom of the stack while the LTM 1750 was rigged to the top portion. The larger crane hoisted the flare stack, stood it upright, and set it in position.

Luikart said the Liebherr LTM 1750 was an advantageous machine for the job because of its convertibility and ability to traverse the muddy conditions present at the site. “A crawler, which could have also done the job, would have been on the site much longer and required additional time for building ground pads on which to crawl into position,” said Luikart. “A crawler also would have required 20 more truckloads to deliver to the job, and this site didn’t have the laydown room to accommodate that. The 1750 had the power and the efficiency that greatly benefitted the customer.”