When autocomplete results are available use up and down arrows to review and enter to select.
Back
Published May 13, 2020
In Roads and Bridges

When railroad tracks through Columbus, Indiana, were upgraded to accommodate larger and faster trains, it was a boon for the local economy, but created a challenge for area motorists. Train traffic was expected to triple, with trains also becoming significantly longer. The result would be frequent delays for car travelers at a major intersection connecting the east and west sides of the city.

The solution was to construct a new vehicle overpass, elevated 23 feet above the railroad tracks and nearby Highway 11.

To set the concrete beams for the new bridge, Milestone Construction chose Central Rent-A-Crane, a member of the ALL Family of Companies, to provide lift equipment for the work. A total of four cranes were needed to complete setting the beams—two for the part of the bridge over the railroad tracks and two for the part over Highway 11. Two days were scheduled for each part, for a total of four days.

Each beam weighed 160,000 pounds and was 131 feet long. A total of 26 beams were needed to complete both parts of the job, and in each of those 26 lifts, cranes were to hand off the beam to one another. A little-used rigging tool would become crucial to accomplishing the task.

On days one and two, for setting beams over the railroad tracks, Central provided a 900-USt Liebherr LTM 1750-9.1 and a 600-USt Liebherr LTM 1500-8.1. “Milestone wanted to perform these lifts without having to move the crane locations,” said Lynn Johnson, special projects estimator for Central Rent-A-Crane. “That meant we needed the muscle these two units could provide at a wider lift radius.” Using smaller units would have added a day for teardown and reassembly to reposition the cranes.

Picking the beams required an unusual rigging approach that was aided by a handoff triangle, a relatively small steel triangle that is specially designed to make handoffs between cranes faster and easier without compromising safety.

The handoff triangle rented from LGH Industrial is approximately 26 inches across. During a beam lift, the first point of the triangle faces down and is connected to the beam, the second point is where the first crane attaches, and the third point is left open for the second crane to eventually connect.

The LTM 1750 moved the beam approximately 50 feet over the railroad tracks below. The second crane, the LTM 1500, then swung its boom into position. A Milestone worker was lifted in a 60-foot man basket and connected the second crane to the triangle, disconnecting the first crane. The first crane, once free of the beam, swung back to the closest point of the beam, picked it, and the two cranes worked in tandem to set the beam in position for the bridge. 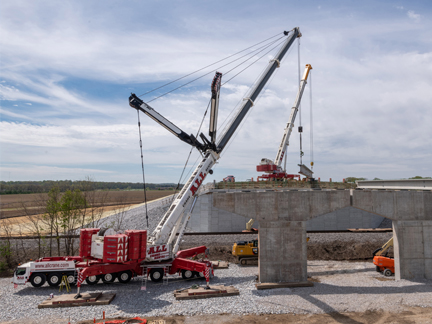 Although it required many steps and intricate planning, the use of the triangle significantly reduced lift times. It is how Central was able to place more than two dozen precast concrete beams in just four days.

The process, except for the use of the triangle, was repeated on the third and fourth days, when beams were set above Highway 11. These picks required a smaller lift radius, allowing the use of smaller-capacity cranes. Milestone provided their own Link-Belt 218 HSL with a 110-ton capacity, configured with 80 feet of main boom and a 20-foot lift radius. Central supplied a 220-USt Liebherr LTM 1200-5.1 with 88 feet of main boom, a 40-foot lift radius, and 158,700 pounds of counterweight.

The use of handoff triangles is still relatively novel. Johnson says this project is just the third time in his 25+-year career he’s used them.